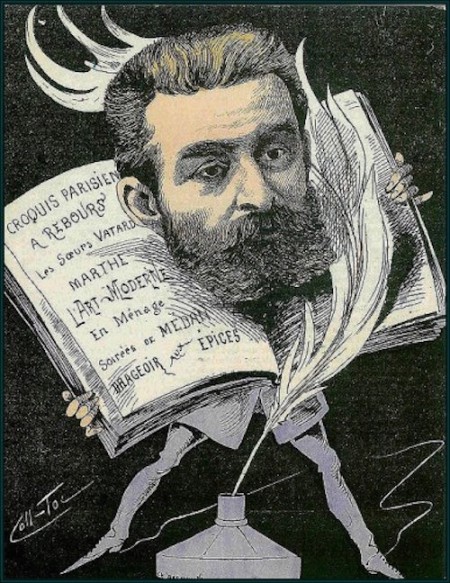 The last quarter of the nineteenth century saw movements calling themselves “decadent” in both England and France, and from the modern reader’s perspective there is very little that separates Oscar Wilde and Arthur Symons, on one hand, and Joris-Karl Huysmans and Villiers de L’Isle Adam on the other. They wrote in the same exquisitely mannered prose, embraced the same cult of artifice and ornament, took as their anti-heroes the same dissolute aristocrats bemoaning the same prevailing philistinism. At the end of Villiers’ play Axël, the hero withdraws from the world with the parting cry, “As for living, the servants will do that for us.” That is a line Walter Pater would have applauded from his box, if he could have bestirred himself to do something so vigorous.

There is one difference between the two decadences: Only the French really believed their civilization was in terminal decline. It was not just the humiliating Prussian rout that made the French decadents believe, with Flaubert, that they were witnessing “le fin du monde latin.” Consumption of alcohol was exploding (it tripled between Sedan and Ypres), science had declared heredity degeneration to be a proven fact, the republican experiment teetered at the brink of failure, and industrial corruption was prevalent enough to trouble even those who did not consider industrialization corrupting by definition. Across Europe, prophets of Western decline from Spaniards to Slavophiles held up France as their chief portent.

In literature, all the old creative schools from classicism to romanticism seemed utterly played out, leaving in their place only a dull philistinism. It was not even the sort of philistinism one could amuse oneself by provoking, as Wilde did with such zest. Emile Zola, the chief novelist of this vulgar school, had been a mentor to Huysmans before the latter abandoned Naturalism for Decadence, and it was with great trepidation that a young Huysmans sent his former master an advance copy of the novel that cemented their artistic break, A Rebours (1884). This is the book that features that famous symbol of decadence, the tortoise with the jewel-encrusted shell, which Waugh borrowed in Brideshead Revisited. In his private critical reply, Zola wrote to Huysmans, “A very bourgeois thought came to me: It’s lucky the tortoise died, because it would have crapped on the carpet.” With such men ranked among France’s literary eminences, little wonder Huysmans felt there was no one left worth writing for.

The English who embraced the label “decadent” used the word mainly in its chocolate sense. It may be contradictory to speak of an optimistic and self-confident decadence, but that is what flourished in the fifteen years after Victoria’s Golden Jubilee. Wilde and his coterie imported the word without realizing that la décadence was something their French counterparts were resigned to, not something they championed. Where the French were genuinely listless, the English were merely bored. Aesthetes on both sides of the Channel reveled in luxury, dismissing more prosaic concerns as beneath their attention, but the English did so on grounds of abundance, the French on grounds of apocalypse.

“Aestheticism has not an enervating influence on society,” Wilde buoyantly declared in 1882. “It redeems it from gross errors and cleanses it from the accumulation of the scraps of ages.” It may be worth noting that, around the same time Wilde was taking all the desperation out of modern decadence, certain British classical historians were rehabilitating the original decadents of the late Roman empire. The influential John Bagnell Bury scoffed at the Victorian view that the fall of Rome was somehow a natural consequence of “the dinners of Apicius and the orgies of Nero. . . . As a matter of fact, luxury and immorality do not constitute, and need not be symptoms of, a disease that is fatal to the life of states.” Interestingly enough, Wilde and Bury both studied classics at Trinity College Dublin within a few years of each other in the 1870s.

Alas for the English, hopelessness turned out to be a crucial ingredient of the decadent worldview. Without it, they fell into errors that their genuinely gloomy French counterparts managed to avoid. Their biggest mistakes usually involved shooting off their big mouths. Wilde’s troubles on this score are well known; less familiar is the story of Walter Pater’s study of the Renaissance. Published in 1873, The Renaissance served as a bible for the rising generation of Decadents, especially its “Conclusion,” which features the famous exhortation to “get as many pulsations as possible” into this brief life and “to burn always with this hard, gem-like flame, to maintain this ecstasy.”

Pater assumed, wrongly, that readers would understand that he was referring to a lifelong cultivation of discriminating taste and not simply hedonism. His error was, as T. S. Eliot put it, “not wholly irresponsible for some untidy lives.” Consumed with regret, Pater omitted the “Conclusion” from the book’s second edition and reinstated it only partially in future editions, altering some offending passages and eliminating any reference to “art for art’s sake.”

Compare this with Huysmans. When his return to the Church was reported in the Paris gossip sheets, many faithful Catholics called for Huysmans to repudiate, and for his publishers to withdraw from sale, the novels of his Decadent period. To be clear, these are books in which a satanic black mass featuring desecration of the host is not the most offensive scenario depicted. But Huysmans refused. As he explained to the Cardinal Prefect of the Index, his novels were all part of the same autobiographical arc, and this testimony had “brought about a number of conversions” among people the Church would otherwise find it difficult to reach.

Huysmans was able to stand behind his books, as Pater was not, partly because he had never attempted to evangelize for his philosophy. He had always assumed he was writing for an audience of the forty people who would understand him, and beyond that, decadence was not a message he particularly wanted to spread. Huysmans was never the enthusiastic exponent that Pater and Wilde were—but then, Huysmans was never as naïve as Pater or as frivolous as Wilde. During his American tour, Wilde marveled at how silly it was that his clique had been denounced from the pulpit back at Oxford: “They took our epigrams as earnest and our paradoxes as prose!” French decadents like Huysmans took their ideas more seriously than that, and this seriousness made them less destructive.

Fundamentally, the difference between the two movements was that the English thought decadence was just a game. Only after intense personal suffering did they come to realize what the French had known from the beginning, that it was serious business in which a person could—almost certainly would—get hurt.

If our age bears a resemblance to either decadence, it is the English. There is, for example, very little difference between treating your life like a work of art, which was Wilde’s theory of how to be a person, and the digital dandyism of “cultivating your personal brand.” Political leanings have not yet been mentioned, but it should come as no surprise that the French Decadents were generally reactionaries but the English generally soft socialists. It is right-wing to observe decadence, left-wing to grab decadence with both hands because it sounds like a great deal.

If this comparison has anything to it, are there any lessons to be drawn? Two, I think. The first is cautionary. Among the anti- and post-decadents of a century ago, there was a marked tendency to swing to the other extreme, trading the effete cult of refinement for the manly cult of muscle. W. E. Henley did it, Lord Alfred Douglas sort of did it, even Teddy Roosevelt (college nickname “Oscar Wilde”) can be said to have done it. Call it the Gabriele D’Annunzio fallacy. Strangely enough, it is a Frenchman who recently came closest to endorsing this form of reaction. In his rich essay on James Poulos’s idea of the pink police state, Pascal-Emmanuel Gobry closes by recommending “a reinvigorated and rethought military service.”

Modified universal conscription does not necessarily put Gobry into D’Annunzio territory, but neither is it the right prescription for his diagnosis. I think Gobry is right that “what we need is to find some way to reeducate most people to risk,” but there is quite enough risk in the modern decadent lifestyle already. The problem is blindness to it. Instead of overamplifying our praise for anti-decadent masculine virtues—which is the one thing I am saying we must not do—conservatives should continue to point out how the misery young people feel is directly attributable to psychologically, sexually, and spiritually risky behavior. Better still would be connecting such behavior to the misery felt by the people around them. In my experience, university-educated people believe that staying within the protocols of consent and good intentions absolves a person of moral responsibility for any suffering they might inflict in their personal lives. “Who have you hurt without meaning to?” is a hard question for anyone to answer honestly, but decadence makes it harder.

The second piece of advice for modern anti-decadents is more passive. Many people know that several of the English and French decadents ended up embracing Catholicism. Nowadays it is easy to take pride in these exotic converts, but at the time very few Catholics were hastening to slaughter the fatted calf. Some doubted their sincerity, others worried that even a sincere aesthete might well be treating the Church like a glamorous accessory. G. K. Chesterton, for instance, never warmed to Wilde, sniping that the old decadent had been drawn to the Church only because “he desired all beautiful things—even God.”

If our present decadence inspires any conversions—and I will be very surprised if it does not, assuming it hasn’t already—we may find it as difficult to welcome our new brethren as Chesterton found it to accept Wilde. Just as the ex-decadents of the fin de siècle still sounded too beauty-minded, their modern equivalents may sound too utilitarian, or too therapeutic, or may speak too much in the language of self-help. Chesterton was right that desiring all beautiful things, even God, is not enough, but for some it made a good beginning. If we can welcome such souls, so should we welcome those who may desire all improving things—even faith.