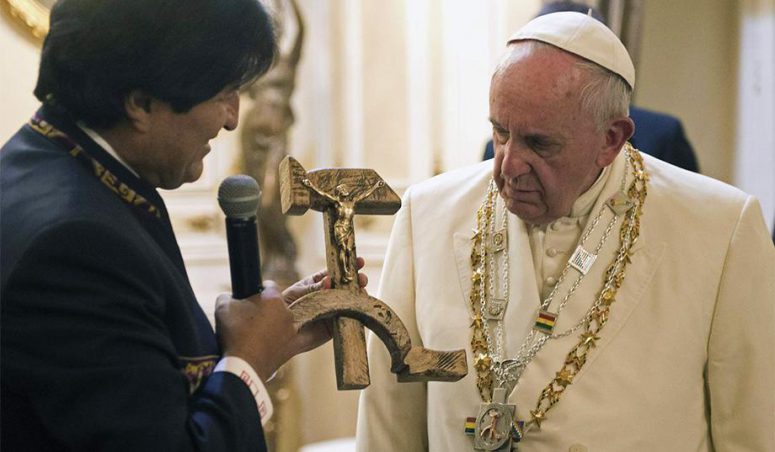 Originally published on the Library of Law & Liberty.

Trust a Jesuit to split hairs. In his book-length analysis of Evangelii Gaudium, Fr. Diego Alonso-Lasheras SJ of the Pontifical Gregorian University in Rome explains that Pope Francis’s first apostolic exhortation is not as anti-market as people think. The well-trained eye can apparently discern this from its use of indefinite articles. The document refers to “an economy of exclusion” (“una economía de la exclusion” in the original Spanish) and “a financial system which rules rather than serves” (“un dinero que gobierna en lugar de server”). If he had really meant to sock it to the capitalists, Fr. Alonso-Lacheras says, “the pope would have used the definite article la or el, thus conveying the idea of a more general, categorical, and absolute condemnation.”

Be that as it may, the expression “Such an economy kills” (“Esa economía mata”) packs quite a rhetorical punch even without a definite article. No doubt this is why Andrea Tornielli and Giacomo Galeazzi, two Italian journalists, have chosen it for the title of their new book. The Pope has repeatedly assured Western skeptics that he is not a communist. Then again, Marx always said he was not a Marxist. It is useful to have so many of the Pontiff’s political statements gathered together in one volume, so that we can check just how far to the Left he really is.

Francis is not a systematic thinker. Even if he were, Catholic social teaching does not exactly lend itself to systematizing precision. From its very beginnings, much of that tradition has been written in the kind of high-flown generalities usually reserved for the preambles of Third World constitutions. Evangelii Gaudium puts forward “four specific principles which”—extract what meaning from this you can—“can guide the development of life in society and the building of a people where differences are harmonized within a shared pursuit.” They are:

Francis tends to be more concrete in his less formal speeches and interviews, where his language is more troubling for precisely that reason. He tiptoed very close to the old Marxist claim that war is the fault of capitalist arms dealers in a 2014 speech to the World Meeting of Popular Movements, claiming that “there are economic systems that must make war in order to survive.” In a speech in Bolivia in 2015, Francis told the gathered activists, “I wish to join my voice to yours in calling for the three L’s for all our brothers and sisters: land, lodging, and labor.” This was the occasion when President Evo Morales presented the Holy Father with a crucifix in the shape of a hammer and sickle.

None of the foregoing means that Francis’ thought owes anything to liberation theology, that hoary old bugbear. The Hispanic tradition has always been less capitalist than the Anglo-American—since before Gustavo Gutiérrez, since before Karl Marx. The mother country Spain, unlike her former colonies, has no tradition of radical priests, yet a gentle hostility to capitalism is nevertheless a running thread through Spain’s political history. All the nasty things Latin Americans said about those soulless, money-grubbing yanquis in the 20th century, Spaniards once said about the British. “In our resistance to the businessman mentality, we are still Spanish, stubbornly Spanish,” wrote Juan José Arévalo, the philosopher-president of Guatemala, in his classic anti-American polemic The Shark and the Sardines (1961). The Spanish political spectrum does have a conservative wing, and it does oppose social leveling, but not out of any love for the free market.

And that’s fine, really. Let us stipulate that every country ought to have private property, enforceable contracts, a banking system, and all that. The rest of the debate between Anglo-American liberalism and Hispanic corporatism comes down to subtler questions with no obvious answers. Is it good or bad to mix personal favors with business? How literally should you interpret nine o’clock in the morning as a start time? When a customer comes in, which of you behaves imperiously and which of you acts like the supplicant? The United States would not be an economic titan if we did not answer those questions the way we do, but I am glad that there are other countries that answer them differently. Being the land of mañana has its compensations.

To the extent that Francis is the enemy of those who say that the efficiency-optimizing approach to life is the only correct one, he is right. But is he really their enemy? The organization that is currently doing the most to force siesta-taking Mediterraneans to adopt the mores of German burghers is the European Union, which Francis loves. When he lends his voice to the call for the effective abolition of national borders, the applause come not from the ordinary workers of Europe but from the very GDP-maximizing Economist subscribers and labor-hungry corporate titans he claims to oppose.

The rationale behind government-funded pensions was that the elderly should not have to rely on their children for support. Advocates pointed to poor grandmothers whose worthless sons had thrown them into the street, or old spinsters with no children to look after them. Social security prevented these horror stories, but it also caused even conscientious children to stop inviting their aged parents and aunts to live with them, on the assumption that their federally supplied pensions would cover rent. (It also caused parents to have fewer children in the first place, which is another story.) Optimists who expected happy, voluntary relationships to spring up in place of the old relationships of material dependence were disappointed. Government pensions have indeed left old people less vulnerable—but more alone.

Liberalism abhors dependence. It would not be going too far to say that the essence of liberalism is the elimination of bonds of dependence. Certainly dependence often results in tragedy, because when someone on whom you depend lets you down, there is nothing you can do about it. That is what dependence means. But eliminating these bonds has perverse consequences. The feminists who campaigned for liberalized divorce told story after story of women shackled to abusive husbands by financial need. Divorce liberated these women from their husbands, but their dependence was not eliminated. It was only transferred to their employers or, more often, the state. For everyone else, the disruption to the old definition of marriage caused more misery than all the unhappy marriages of the 1950s combined.

This same allergy to dependence is detectable in the new vogue for Catholic socialism. When Pope Francis, in Evangelii Gaudium, writes that “the socioeconomic system is unjust at its root” and that our economic problems are not incidental but “structural,” this inequality between worker and employer is a major part of the “structure” referred to. The Internet statement posted last year by a group of American Christian socialists, the notorious “Tradinista Manifesto,” stated flatly that “livelihood should not depend on the market” and free markets “become vehicles of exploitation when people must sell their labor-power on the market in order to survive.” In the case of these young Tradinistas—leaving the Holy Father out of it for the moment—their hostility to the idea of being at the mercy of a boss seems visceral, almost psychological. The implicit assumption that there is something intrinsically wrong with being subordinate frankly savors of pride.

Dependence is the natural state of man, from which he cannot escape no matter how hard he tries. This is one reason the disabled and the weak enjoy spiritual gifts in such abundance. They are forced to confront the truth that the rest of us can conceal from ourselves: that none of us is remotely self-sufficient. Some relationships of dependence are part of the natural order, and employer–worker is one of these, no less than husband–wife or ruler–subject. Its abuses can be mitigated, but the worker’s fundamental vulnerability cannot be eliminated, as all forms of socialism attempt to do.

The 16th century Spanish Thomists of the famous School of Salamanca were provoked to reconsider their ideas about property by reports from the returned conquistadores that the Incas of Peru held all things in common. The Spaniards were not converted to collectivism by any means, but the burst of fresh matter for thought brought new depth to their philosophy. Those of us who are from a nation that lies outside the Catholic social tradition, and well outside the Latin American economic tradition, should allow Pope Francis to provoke us into to new thoughts. But in a field in which the Pope, by his own admission, does “not talk as a specialist,” we are not bound to agree with him.