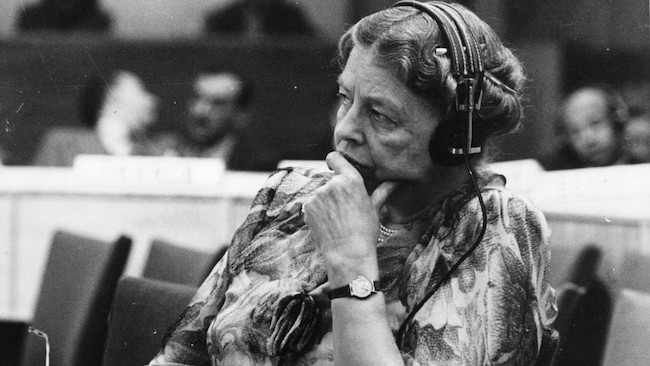 Originally published in the Winter 2021 issue of the Claremont Review of Books.

In 1996, Bob Woodward embarrassed First Lady Hillary Clinton by revealing that she had attempted to commune with the ghost of Eleanor Roosevelt during a session with a spiritualist in the White House solarium. Mrs. Clinton explained that her “conversation” with Mrs. Roosevelt served no occult purposes but was merely a psychological exercise to put herself in the mind of the only presidential wife in history more hated than Clinton herself. During her 2000 campaign for a U.S. Senate seat from New York, Mrs. Clinton appealed to her predecessor again. Mrs. Roosevelt had briefly considered running for a Senate seat from New York in 1945 after her husband’s death. Hillary hinted that her own election would redeem that missed opportunity and ratify Eleanor’s legacy.

The irony of Eleanor Roosevelt, feminist political icon, is that her career was a 50-year vindication of every misogynist cliché about women in politics. Her politics were sentimental rather than rational. She was impulsive and easily swayed, a busybody who meddled in every issue under the sun without bothering to master anything intellectually. She honestly believed we could end poverty and war by all being a little nicer to each other. Hillary at least has a political temperament. Eleanor, had she not married Franklin Delano Roosevelt, probably never would have gone near politics at all.

How did a person so unsuited to the political life become the most admired woman in America and “First Lady of the World,” as Harry Truman dubbed her? David Michaelis, biographer of cartoonist Charles Schulz and illustrator N.C. Wyeth, tells the story without ever quite solving the enigma. In the end, the most we can say is that Eleanor was the opposite of her husband. The lesson of FDR’s life was the power of character to overcome unfavorable circumstances. The lesson of Eleanor’s was the power of circumstances to make a heroine out of the most unpromising character.

Read the rest at the CRB.