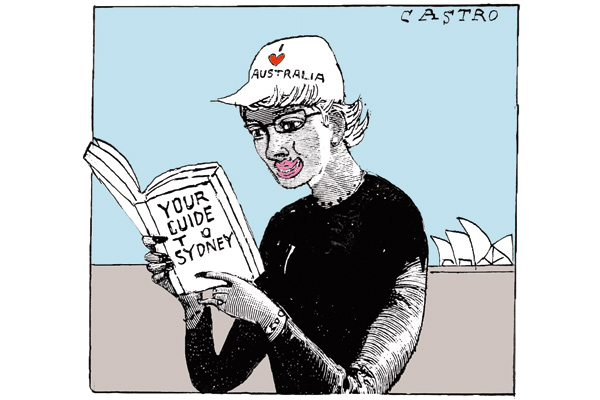 Originally published in the 7 July 2012 issue of the Spectator Australia.

When I told a former coworker of mine that I was leaving New York City to spend three months in Australia and asked whether he knew what to expect of its inhabitants, he told the story of the first Australians he’d ever met, fellow attendees at an event in Manhattan. This man is a professional writer and his stockpile of adjectives is not small, but he strained to find one that would convey not only the volume but the unblushing boldness of their conversation, much of which was unrepeatable to a young lady like myself. I asked him whether it was fair to base his impression of Australia on a group of individuals who, from his description, could have been backpackers just escaped from their hostel. He said it was the UN delegation.

The lady whom Qantas had chosen as my co-star in its revival of Sartre’s No Exit — 15 hours long, but that show’s still running — was not like that at all. A soft-spoken professional, my flightmate kindly told me that if I wanted to stay in a neighbourhood of Sydney that would remind me of New York, I should try Potts Point. You’re wide of the mark, dear, I thought. It’s June. I am flying from summer to winter. People who can afford to live in Potts Point do it the other way around.

The climate I was fleeing had nothing to do with temperature. A fifth of young college graduates can’t get a job back in the States, and another fifth are bringing their erudition to fake jobs like temping and teaching preschool. Over a million more adults are living with their parents now than were in 2007. The number of car miles driven by under-30s has dropped by a quarter — my age cohort is so broke that it’s saving the planet.

Australia hasn’t had a recession in two decades and is now the top-ranking normal-sized country on the global economic freedom index. I had always been given to believe that the country of my birth was the freest and most prosperous in the English-speaking world. Those two things might even be what Americans like best about their country — which admittedly does not require that they be true. Perhaps I was taught an error. Well, I’m young enough to correct it.

Of my two expectations of Australia, prosperity and lack of refinement, the latter presented a more immediate but less lasting impression. On the fourth day of my trip I attended a conference in Melbourne — name tags, PowerPoints, finger sandwiches in a hotel cafeteria, the whole business. Towards the end of it, during post-dinner drinks, one of the organisers abruptly lunged for the part of my torso located between the clavicle and the middle rib. In my country, any woman would have taken this as an affront, but it turned out he was simply annoyed that I was still wearing my name tag at such a late and convivial hour of the evening and thought he’d remove it himself.

On the other side of the ledger were the people at the Sydney Good Food and Wine Festival, who, if they had been teleported to Smorgasburg, the snooty Brooklyn food market, would not have alienated its vendors of artisanal mayonnaise — though it was a bit jarring to hear one Sydney seller claim that a certain sparkling Shiraz “paired well with breakfast.” Elsewhere, at a dinner party, my tablemates were a food critic and a bioethicist, two people whose very existence argues not only for their country’s sophistication but also the strength of its economy. Australia’s adrenalised GDP may rest on a mining boom, but that money has to be moving in a pretty wide circumference if Sydney can afford superfluities like food critics and bioethicists.

I must take great care in describing Australia’s prosperity, to avoid seeming bitter. I couldn’t be happier for you, really. And you’re handling it so well. When I asked a cluster of partygoers whether they knew anyone who was unemployed, one of them was polite enough to say that he did, although he did clarify, “Wait, did you mean people who aren’t working but want to be? Then nah.”

My equanimity in the face of Australia’s relative wealth faltered only once. Friends of my host invited us to dinner at a nice restaurant with dim lighting and an obviously well-off clientele: not the sort of place anyone in my age bracket back home would be able to afford the way things have been going. I pecked and grazed and stayed within my budget, but my self-restraint was not sufficient to prevent me from goggling at the free-spending feast across the table. I don’t mean that my companions were impulsive. Anyone who goes out to dinner has some idea of how much he expects to spend that night, and it just happened that in this case their expectations could accommodate a $30 dessert. I remember New York before the GFC, and that’s about what it was like.

“Your friends are charming,” I told my host afterwards, “but what the hell do they do for a living, black-market arms sales? Or is everyone in your country so well remunerated at such a young age? If that’s the case, I’m telling every one of my unemployed friends back home and starting an exodus that will make the Prague fad of the Nineties look like a high-school field trip.” He gave me a moment to stew abashedly in my petulance and then explained: his friend wasn’t an arms dealer, he’d won a pile as a game show contestant. Isn’t it always something like that in the Lucky Country?